Over the course of Smash Ultimate, a handful of patches have slightly adjusted the AI of CPUs and amiibo. While the effects of these patches are not documented to any extent, the community agrees that they definitely did adjust things for both types of AI, especially after the 3.1.0 update.

It was around this time that I made a rather funny discovery. We’ve known that there was a community of people who analyze and train amiibo… but there’s also a community that analyzes the built-in CPUs of Smash games. And, incidentally, they have a tier list of Ultimate CPUs as well. The most recent update was about a month ago, so I’m pretty comfortable with saying it’s a recent update. Let’s take a look at their most recent tier list: 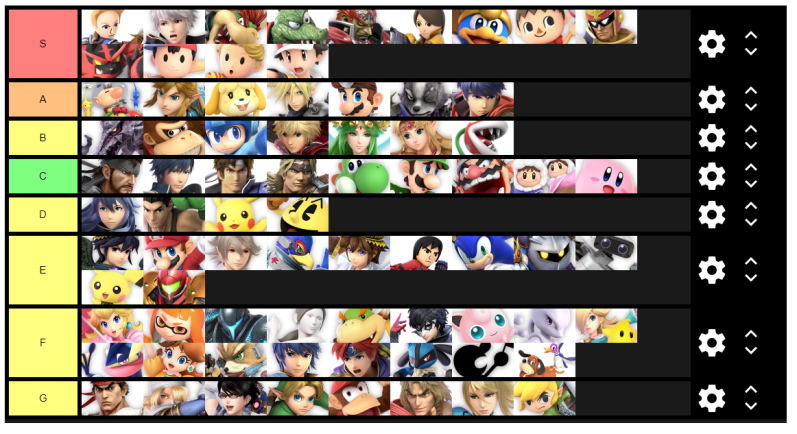 Now let’s compare that to the June 25th version (the most recent) of the Ultimate vanilla amiibo tier list: 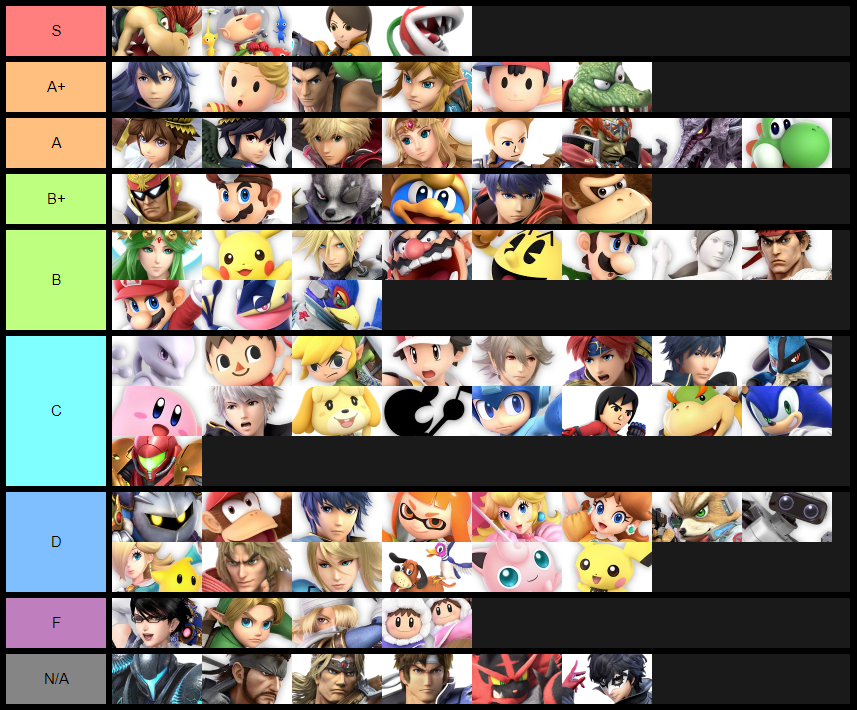 Aside from the obvious choices of coloration, and the fact that the amiibo tier list is missing the six characters at the bottom, pay attention to something really odd. The characters that are high-tier in amiibo tournaments are also typically high-tier in CPU tournaments, and the ones that are low tier in amiibo tournaments are also typically low-tier in CPU tournaments. They may not be in the same tier, and there are a few notable exceptions, but generally that character’s AI is at about the same skill level regardless of the form it takes.

Let me demonstrate with the amiibo high tiers:

As you can see, these placings tend to line up fairly well, even with the tier lists using different spacings between the tiers. Often the top tiers are the top, and the low tiers are the low, and the same is also true for the middle. I think I’ve made my point.

So what really is the difference between amiibo and CPUs, if we know from You are always training an AI that CPUs are also learning from you? And what’s the deal with some of the glaring differences between the lists, like Greninja’s B tier placing in amiibo but F tier placing in the CPU list?

Let’s answer both of those questions with one shot. Amiibo are unique from CPUs in that they are directly trainable. CPUs don’t pick up moves as quickly and certainly don’t exhibit only the behaviors that you want to teach them: they draw from all your move usage. Spirit Board battles? They pull input from that. World of Light, or Classic Mode? Yep. Regular 1v1 Smashes? Those too. Every time you play a character, it seems the CPU pulls information from that match.

Amiibo, on the other hand, are only learning when they’re scanned in (There is still a lot of grey area as to what actually happens when Learning is Off). They only learn what you teach them or what they use randomly, and they can be taught to cheese opponents in ways that CPUs really can’t be reliably taught, such as Mii Gunner’s missile spam. In addition, amiibo don’t operate based off of playstyle like the CPUs do. Instead, they seem to interpret the instructions on their amiibo and play off of that, or in other words they’re given a set of controller input probabilities and a loose underlying AI to interpret those probabilities. Amiibo have 540 bytes to play with, CPUs have… however much more they have.

Let’s move on to the topic at hand, then: can we use the CPU tier list as an indicator of an amiibo’s I variable potential? It seems that in quite a few cases the tier lists line up. Even though they’re both the opinions of two independent groups with no contact between each other, they both came to similar conclusions about different adaptations of Ultimate’s AI.

I think we could, although it’s not clear how precisely the I variable reflects the CPU’s position on their tier list. Amiibo do have their own training, and sometimes the amiibo have its own unique quirk that the CPU is free from (or, in other words, the amiibo’s I is very unreflective of the CPU).

We’ll boil the arguments for and against down to a simple list:

It’s pretty clear that until Ultimate hacking becomes very, very advanced, we probably will never understand the inner workings of amiibo and CPU AI. At this point in time we can only compile as much information as possible, and see what we can tinker with.