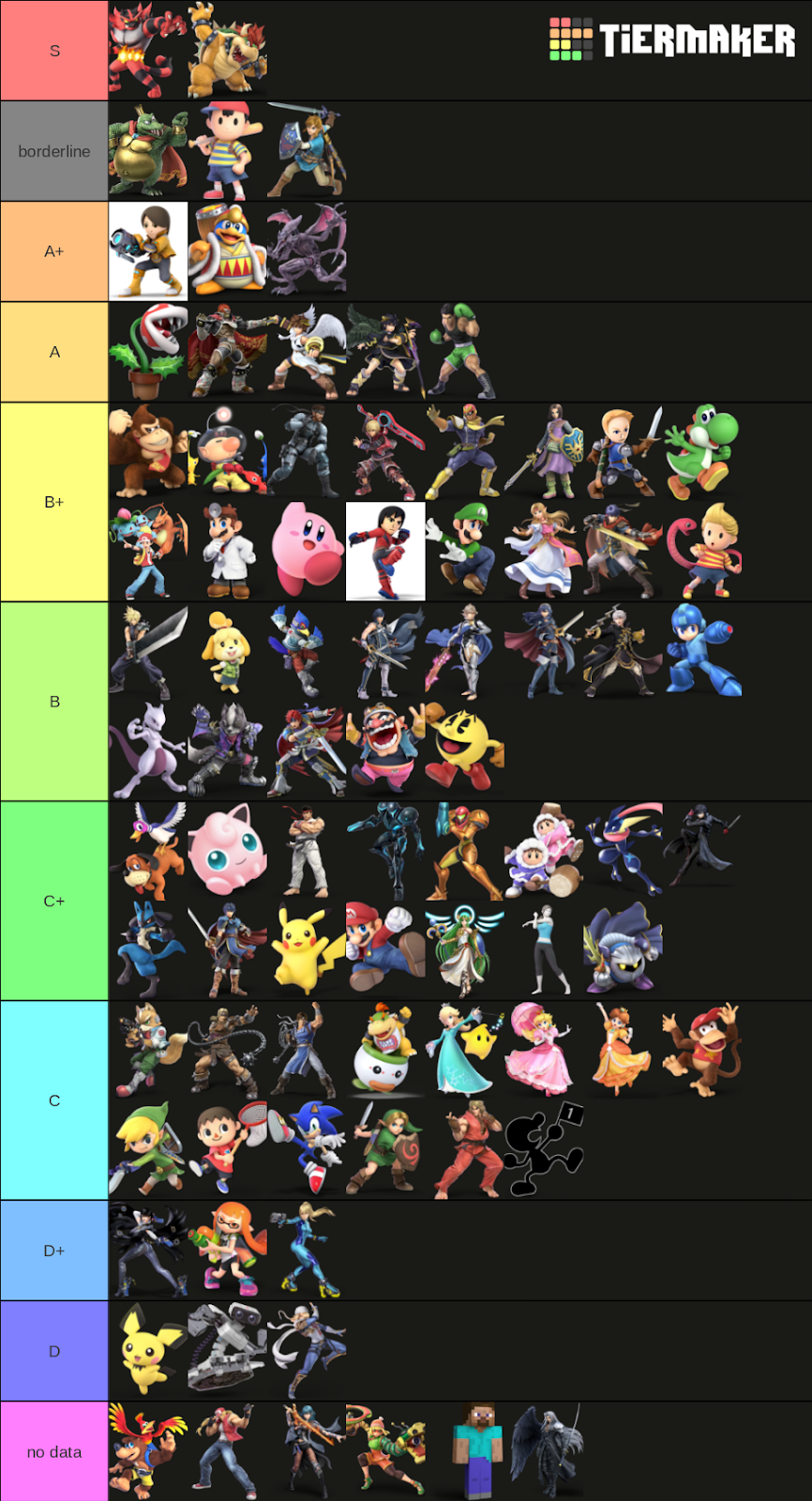 Let’s talk about the big winners of this tier list and how it differs from the vanilla tier list. The very first thing we need to talk about is the new borderline tier consisting of King K Rool, Link, and Ness. These three amiibo all have something about them that is considered ban worthy but they’re still not on the level of Bowser and Incin, K. Rool is still K. Rool they hit like a truck and just refuses to die, Ness has pk fire spam, and with spirits like fire and explosion attack and psi attack up, it makes the amount of damage pk fire can do absolutely ridiculous. As for Link he is only up there for one spirit and one spirit only, giant. The giant spirit gives your amiibo the effect of the super mushroom, that paired with Link’s amazing tool kit and smash attacks that do bonkers damage, has been leading to the debate of banning him with the spirit affect, as the only real counter is an amiibo with curry and even then it’s always guaranteed. Link without the giant spirit affect would still be A+ like in vanilla

The only changes in these tiers was getting 3 amiibo moved up to borderline and getting two new additions in Little Mac and ganon. Now if you have seen any off Wumbo’s amiibo tournaments you would have seen these two play at some point. Little mac is strong, his smash attacks go right through your moves, and his KO punch, if he has max attack, can take a stock at zero. As for ganon with max attack they have the ability to kill you with f smash after any 2 moves, this paired with ganon being a heavy makes up his low defences. The only other change in this tier was Zelda dropping to B+.

This is where most of the changes happened. Zelda fell down into this tier for 2 reasons, one, lack of good matchups, and two, a lack of notable placements. Zelda only has one good matchup against the top tiers, yeah you heard me, one, and it’s Ridley. The other heaves are able to just smite her down with how light she is. The other changes are found in Yoshi, Mii Sword Fighter, and luigi. Yoshi got moved up mainly thanks to their notable placements by True Titan and Penguhr who have been running a down b spam yoshi with shield damage up, able to break shields in one down special. luigi got moved up because of instadrop not much to say here, always a dominant threat when instadrop is legal. Mii Sword Fighter has been getting a lot more rep as of late currently with power thrust spam thanks in no part to Penguhr and obsessed.

The big change in B tier is Mewtwo who jumped up from C (in the vanilla tier list). The biggest reason for this is the extra kill power they get in spirits and the quicker games they provide. One of the reasons Mewtwo is so low in the vanilla tier list is that they’re a ticking time bomb, they don’t know how to use their up special correctly, leading them to self-destruct often. But the quicker games from spirits makes Mewtwo far more constant.

As for the rest of the changes, they’re very small. Ice climbers and Meta Knight got moved up to C+ but those amiibo have shown more promise as of late in vanilla as well, and it’s only a matter of time before they get moved up to C+ anyway.

As for D+ tier honestly i think you could put any of those characters in D and it would still make sense. Inkling can’t kill, bayo has the latter combos but can’t get them consistently, and zss has a whole bunch of AI issues.

Now as of the time writing this the last 3 amiibo for the first fighters pass isn’t out yet but i have a feeling that all 3 of them will make some splash in the amiibo scene spirits or otherwise. I’m not going to say where I think the amiibo are going to land but it would surprise me to see any of them place lower than B tier.